I struggled coming up with Christmas presents for my 7-year-old son, Landon this year. The ONLY thing he asked for was FIFA18 (a soccer video game) and the jerseys of some of his favorite soccer players. Literally all he cares about is playing soccer, watching soccer, going to soccer games, playing soccer videogames, and maybe a little basketball. He no longer plays with toys, what little he has left in his room, and sometimes it makes me feel like I have a teenager already.

One day he mentioned wanting a watch so that he can practice telling time and time himself — when playing soccer, of course. Finally, something I could work with! He’s much too young for a phone, so I wasn’t about to go that route, but a smart watch might be cool for a kid who’s grown up around a lot of tech gadgets (thanks to his weirdo, techy mom) and would be good for helping him tell time and time himself running around the yard or whatever he wants to do with a timer.

So I started on my search for the perfect smart watch for a 7-year-old kid. Again, I’m a pretty tech-savvy person, and I rather enjoy a good research sesh, especially if it means looking at cool tech gear. On my search I found a few lists of the top (insert number here) smart watches for kids, but a lot of them seemed to be from last year for some reason. But I went ahead and started there. After a little research, I decided on some of the top features I wanted:

Finding ALL of these features in one watch wasn’t the easiest. There was one that I found, but it has been discontinued (at least for now) in the U.S. for whatever reason. There are several great smart watches for kids on the market, but most of them only had 1-2 of the features I wanted.

Then I found the Kidsport Burst. It had EVERYTHING I wanted. It’s made especially for kids. It has a GPS tracker. It has basic calling capabilities — I can program in names/numbers that he is able to call from his watch, and I can call his watch from my phone. It has a timer/stopwatch and some basic health features like step tracking. I can set boundaries on the watch, so if Landon is playing in the neighborhood and goes outside of a boundary, I will get an alert on my phone. 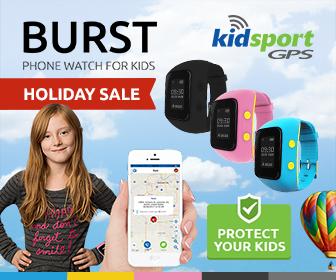 There are tons of great features that really make me feel like I will have a little more peace of mind when Landon is at practice or playing in the neighborhood. Plus, he will feel super cool wearing it, which is very important, of course. I got him the black one because I thought it looked more like a real watch, which he will find super cool; but it also comes in blue and pink.

The watch was also very affordable. Because of when I bought it, I ended up getting it for only $70, however it is normally $149 — which is totally worth it, if you ask me. They are also having a sale right now where you can purchase the watch for $99. After I ordered it, I received it within about a week!

It DOES require a service plan, though. But, it is only $14.95/monthly, which is much less than a cell phone and again, worth it in my opinion.

Now, this IS an ad. I wasn’t paid for posting this and I may never get anything from it, however, if you are interested in buying the Kidsport Burst for your child, please follow this link, so that I will receive a commission for referring you: Kidsport Burst 🙂

Below is a video (I have a free WordPress site so it won’t embed for me) going over some of the awesome features!

I am a writer, dreamer, mom, lifelong learner, and a software developer with a passion for creating. My passions include programming/coding, literature, writing, cooking and, believe it or not, videogames. My dream is to someday publish a novel. View all posts by Brianna R.